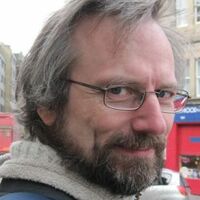 By Herbert Gangl
HG is a mathematician at Durham University, UK. He uses `ideal tessellations' of hyperbolic 3-space as a rich source of beautiful new polytopes. Variations on these polytopes give rise to decorative objects and even jewellery.
Send Message Origin: The legendary gems of Hypolytos (not to be confused with the Greek deity or the Roman theologian called `Hippolytus') appeared to be lost for good. By a streak of sheer luck some of them may have resurfaced... For the origin of the name `Gems of Hypolytos', see the fictitious short story below.

Software used: The models were mostly produced with OpenSCAD, invoking e.g. routines for polyhedra originally written by Kit Wallace, using data that were obtained using PARI/GP (a free and fast computer algebra package), the ConvexHull3D routine in Mathematica, and a certain `spherifying' affine transformation found by Josh Inoue during a summer project in pure mathematics (Durham University).
A few other models were realised with Rhino 5 for Mac.

Photos: Some of the best photographs were shot by Djoko Wirosoetisno (Durham).

The Legend of the Gems of Hypolytos
Legend has it that in ancient Greek there was a man going by the name of Hypolytos who had an unparalleled talent for both envisioning and masterfully crafting beautiful geometric objects. Whenever he embarked on one such vision, he would seclude himself from family and friends for days on end to construct a tangible model, made out of wood or straw, of the image he had in mind, until he eventually resurfaced and proudly presented the fruit of his endeavours, after which time he would gift this model to an appreciating friend.

Over time, his creations became cherished not only by his fellow citizens who gladly beautified their own living rooms with them, but they were increasingly held in high regard also by the more wealthy people, and before long Hypolytos was asked to beautify their mansions and to also decorate festivities of all sorts. For these occasions, he would teach young people so that they could help him with the more tedious work, and the most gifted ones received special lessons from him in which he unveiled to them many of the secrets of his trade.

Within a short period of time the lasting success of his creations allowed him to open a small school, an endeavour he embarked upon somewhat reluctantly as he did not intend to give up his freedom to seclude himself at will. One of his best students was called Gemina, a girl with outstanding talent who not only learnt the tricks of the trade incredibly fast but also turned out to be very reliable which made her the perfect assistant to stand in for him during the many times when Hypolytos wanted to disappear.

One day when Hypolytos was "out in the woods" again, Gemina was adoring the local jeweller's show cases when it suddenly struck her that Hypolytos's creations ought to make for beautiful gemstones. Upon his return it did not take long for him to appreciate her idea, and after convincing the jeweller of its feasibility they began to design ways to realise the geometric structures in precious metal. When they finally found a method that allowed an economical production of the pieces they were able to sell the objects as `the gems of Hypolytos' at an affordable price.

But happiness was not meant to last very long. The jeweller soon managed to convince Gemina that they would need to make fewer yet exclusive models allowing them to raise prices substantially--he had heard from wealthy people that they would be happily paying far more in exchange for very limited editions. Hypolytos did not approve at all of this idea, as he felt deeply that everyone should be able to afford the pieces, and so Gemina and the jeweller marked time until he absconded again for a while during which time they took the opportunity to follow their plan through.

When Hypolytos finally reappeared and found out what they had been up to behind his back he was absolutely furious. They tried to appease him with a big share of their recent big earnings but he was inconsolable and instead demanded the moldings for his inventions from the jeweller. The latter though refused to hand them over.

So Hypolytos one day hired a band of thugs to break into the jeweller's store, to destroy all the moldings they could get their hands on, and to run off with all the gems they could find. Hypolytos himself disappeared yet again, this time for a very long period indeed, and without his vision Gemina and the jeweller were not capable to recreate objects of the same beauty.

Since that time the legendary gems of Hypolytos appeared to be lost for good. But by a streak of sheer luck some of them may have resurfaced, in the form of polytopes arising from different tessellations for hyperbolic space…
h.g.