Two open-ended Superstrings with the correct spin can be merged into a super-symmetrical cube.

The idea for this puzzle emerged when I was designing shapes based on two interlocked tetrahedra.  Inspired by ideas from 'string theory' and 'super-symmetry', I began to search for shapes that were both symmetrical and as similar as possible.

Taking the two pieces apart is not too difficult; reassembling them back into a cube can be more challenging. Hold one of the pieces still; move the other piece through the correct sequence of lateral and rotational moves.

Reviews of Superstrings by puzzle enthusiasts from around the world.
"Another great little pocket puzzle from Richard Gain" - Allard Walker - Puzzling Times
"I can't really think of any downsides with this one, it was an elegantly designed puzzle that was fun to solve. Well done, Richard!" - Brian Pletcher - Mechanical Puzzles
"An attractive tactile puzzle with a decent challenge but not too awful - a really good addition to my display." - Kevin Sadler - Puzzlemad
"This is a really tough puzzle, and I can see why it won favor with the judges at IPP. Much easier to take apart than it is to put together, Richard can be rightly proud of this one." - Neil Hutchison - Puzzling Parts 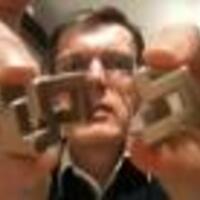