Amznfx
$34.49
3D printed in fully colored material with a coarse finish and a delicate feel.

Is not Secret Republicans use pro life and homophobia to further their political agenda. Not Because they care about a distorted version of the bible or hate women or planned parenting. Because It's an easy method to curtail a big part of the dumb and uneducated part of the population.

Well since Ted Cruz decided to appeal to homophobes to gain and retain power. I've Decided to immortalize this hateful Texas politician into an Anal plug. So if this hateful politician wants to insert him-self into the lives and sex lives of gay couples. Then he now will be able to do so in the only orifice politicians like him belong and deserve. So Help me immortalize the #tedCruzPlug by sharing, tweeting, blogging, instagraming this Ted Cruz plug.. Help me make this image of ted cruz viral so when he gets on that podium and spills that hateful speech he is famous for.. he will think twice for messing with our friends, family, coworkers etc.

For Years we have been hearing Conspiracy theories of a Candidate that was sent from a foreign country decades ago to destroy America within. That Foreign Powers in other countries had decades old plan to send one of their own to take power, to destroy the economy, freedom, and liberties of Americans. After Years of research and dot connecting i'm here to tell you this conspiracy theory is not a theory after all.

Who is responsible for a government shut down who costed the economy $24 Billion Dollars? Who Performed a filibuster while reading out loud a communist kids book? Who is responsible for pushing the republicans to the right so much that they are now losing easy elections? Who was born in Canada with parents from communist Cuba? I tell you who!! TED CRUZ!

This Guy has more damage to the american economy and the credibility of the United States Congress than any terrorist has ever dreamed of. If Osama was alive he would be giving ted cruz high fives after the government shut down. If this Canadian from communist Cuban descent is not the perfect example of a Manchurian Candidate i don't know who is.

Ted Cruz is not only unpopular with Democrats but he is equally hated by sane Republicans so i like to think this is my 1st bipartisan Political sculpture besides my Rob Ford Action figure.

Some People Might Find this Figure insulting to Cuban people or Canadian people. I would agree with you. I think Ted Cruz is an insult to American Politics, a waste of tax payer money and just a daily reminder of how broken our election process is. I know that Ted Cruz doesn't like to mention that he is Canadian, or Cuban specially while bashing immigrants and blocking immigration reform (ironic). But if Cuba or Canada like to take back this this Manchurian Candidate America would be extremely Grateful. 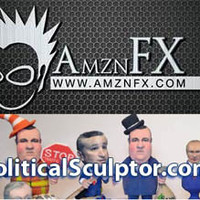