On Pixhawk and APM equiped multirotors, the flight controller's internal barometric altimeter is often affected by airframe aerodynamic effects when in lateral flight. The typical symptoms are rapid descent at the end of a horizontal run, and/or steady, gradual descent during a horizontal run.

The cause is a low-pressure zone that forms around the airframe in fast flight. The Pixhawk's internal barometer is inside this low-pressure zone, causing the flight controller to think that it is rapidly climbing. It responds by rapidly descending to compensate. Not all airframes are affected by this phenomenon, but a great many are.

This static pressure port counters the aerodynamic effect in two ways. First, it puts the barometer's port outside of the low-pressure zone when mounted on a 3mm tube. Second, the shape of the port itself makes it more or less immune to static pressure measurement errors due to rapid airflow around the port.

This part is small and lightweight enough to mount on typical hobby drones. It is designed to be mounted on a 3mm hollow carbon fiber tube. This tube should be long enough to place the static pressure port away from the airframe. The minimum distance may need to be determined through experimentation, but is not critical. 10" was enough for my DJI F450 frame, and that aircraft had a big altitude problem.

The carbon tube can be attached to a 3mm R/C truck or boat antenna mount. It is necessary to mod the Pixhawk to use an external pressure port. It's not hard to do, and only takes an hour or two. There are discussions about how to do this on www.diydrones.com. This model prints as two parts that must be glued together. The 3mm tube can then be inserted until it stops and left as a friction-fit, or glued. The tube should pass through the bottom half and up into the top half until it hits a stop in the recess in the top.

The photos show the first prototype installed on my F450. The extra bit of silicone tubing on the pressure port's mast is a flexible coupling to help prevent damage in handling or a crash. 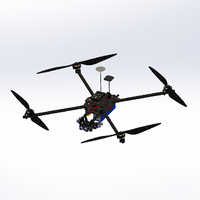