Models
$14.50
3D printed in fully colored material with a coarse finish and a delicate feel.

This 1:10,000,000,000 scale model of the solar system shows all eight planets bathing inside a slice of the Sun's photosphere.

Full credit for the idea goes to /u/Andromeda231 on Reddit.

I'd like to sincerely apologize to Pluto. I wanted to add you in too, but you're just too small to show up at this resolution :(

The preview render shows Mars as blue due to an error in the original model file. This has since been corrected, and Mars is printed as a red planet, fully textured like all the others on the final model.


Data for surface coloration comes from the following sources

Saturn:
A Map of Saturn from Cassini and Voyager 2 - Björn Jónsson

Uranus:
This one's really just a solid colour due to its atmosphere.. 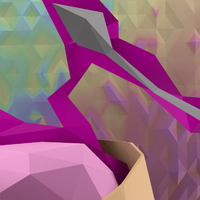