moleculestore
$40.98
3D printed in enrobed in 24k gold and polished to a mild sheen with visible print lines.

Benzo[a]pyrene is a polycyclic aromatic hydrocarbon found in coal tar with the formula C20H12. Its metabolites are mutagenic and highly carcinogenic, and it is listed as a Group 1 carcinogen by the IARC. The compound is one of the benzopyrenes, formed by a benzene ring fused to pyrene, and is the result of incomplete combustion at temperatures between 300 °C (572 °F) and 600 °C (1,112 °F).

In the 18th century, young British chimney sweeps who climbed into chimneys suffered from chimney sweeps' carcinoma, a scrotal cancer peculiar to their profession, and this was connected to the effects of soot in 1775, in the first work of occupational cancer epidemiology and also the first connection of any chemical mixture to cancer formation. Frequent skin cancers were noted among fuel industry workers in the 19th century. In 1933, benzo[a]pyrene was determined to be the compound responsible for these cases, and its carcinogenicity was demonstrated when skin tumors occurred in laboratory animals repeatedly painted with coal tar. Benzo[a]pyrene has since been identified as a prime carcinogen in cigarette smoke. When the body attempts to metabolise benzo[a]pyrene, the resulting diol epoxide reacts and binds to DNA, resulting in mutations and eventually cancer.(from Wikipedia; chain not included)

Can be used as a pendant on a necklace, keychain, earring, or whatever you find it useful for.
Note: the material "(Polished) Strong & Flexible Plastic“ is not recommended for keychains! It’s great for earrings though!

Got any questions? Write us an email or use the comment section below.

Please follow us to keep in touch (new products, coupons and stuff):
Tumblr
Twitter
Newsletter (once a month or less). 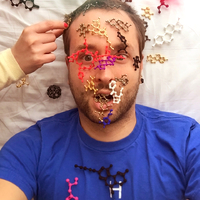