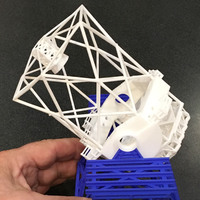 By SCI3D
3D-Printed items from

For your 3D-printed Keck Telescope Scale Model,
order one each of the three items shown below:
Keck Telescope Upper, Lower, and Pier units.
Then for added realism, add the laser-cut Primary Mirror and Nasmyth Platforms
from your Keck Telescope laser-cut SCI Kit.
Send Message Since 1987, SCI has been offering high-quality, low-cost educational scale model kits representing real space-exploring machines. They're on our website, www.spacecraftkits.com. Picture one on your bookshelf, in your office, or in your classroom, revealing how space exploration works.

At first, SCI kits were all made of laser-cut recycled card stock. Then came 3D printing, and  in 2012 our 3D STL files became available; some free of charge, and others for 99 cents for you to download and use directly on your 3D printer, or send to any commercial 3D-printing service. Now, in 2019, some fully-printed items are available right here through our SCI Shapeways Shop. Many are compatible and interchangeable with componenets in the original laser-cut kits.

Now we've opened our SCI Shapeways Shop. Here,  you can easily buy fully-printed articles with just a few clicks! All the guesswork has been taken out, and the items offered are promptly printed in the appropriate material, size, finish, and the best available color.

In 1987 SCI began producing spacecraft scale model kits using intricately laser-cut recycled card stock, with detail applied by foil-stamping and lithography. We were pushing the leading edge of commercially available technology with our requirements for highly detailed and intricate component designs. Now we are excited to be pushing the leading edge once again, this time with products in a whole new wave of technology: 3D printing!

Our longest-selling scale model is of the NASA Voyager Spacecraft. The two spacecraft were launched in 1977 for a grand tour of the solar system, and as of 2019 they are still communicating regularly with their team of engineers and scientists on Earth, from beyond the heliosphere. On the SCI Kit Voyager model, the most challenging part, arguably, is its dish antenna, which Voyager uses for communicating with Earth, and to carry out various radio-science experiments. (Additionally, on February 14, 1990 Voyager 1 used its HGA as a sun shield while taking the famous "Family Portrait" of the solar system.) In 1987 when we introduced the Voyager SCI Kit, its High-Gain Antenna, HGA, main reflector dish was represented by a circle of laser-cut paper that folded into a shallow cone. It was minimally realistic. Since 1994, the kit (http://spacecraftkits.com/Voyager.html) includes a styrofoam dish instead. Its shape is not parabolic, as it should be, though the difference is hardly noticable. Still, though, the laser-cut paper versionHGA assembly has five additional paper parts to contend with. Now, in our Shapeways Shop, the whole HGA assembly is available as one piece. It includes the main reflector with the sun-sensor port and the feedcone, the tripod and subreflector, and the low-gain antenna and waveguide. Plus, the main reflector has the appropriate parabolic shape.

The other challenging part of the Voyager SCI Kit model is its Magnetometer Boom. On the spacecraft, this fiberglass boom extends 13 meters from the magnetically noisy central spacecraft equipment. The paper version is very frail, and it can develop a sag over time, especially in damp climates. So now the Voyager MAG Boom is one of the items for sale as a 3D print in our Shapeways Store. For full-length to scale on the model, glue two of the MAG Boom pieces together.