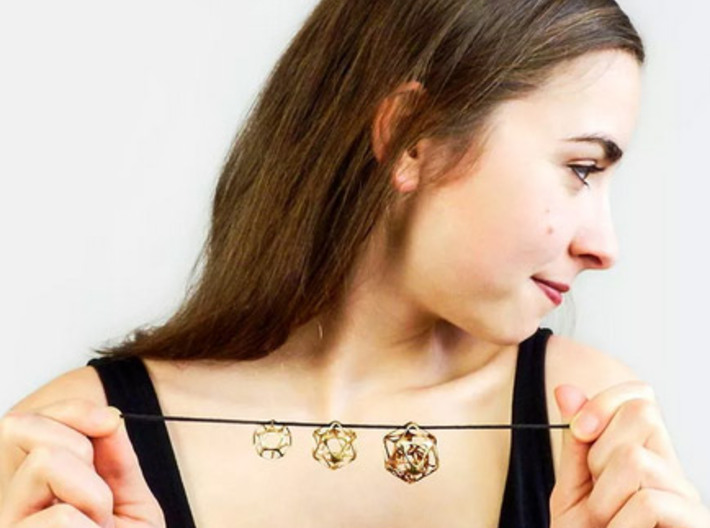 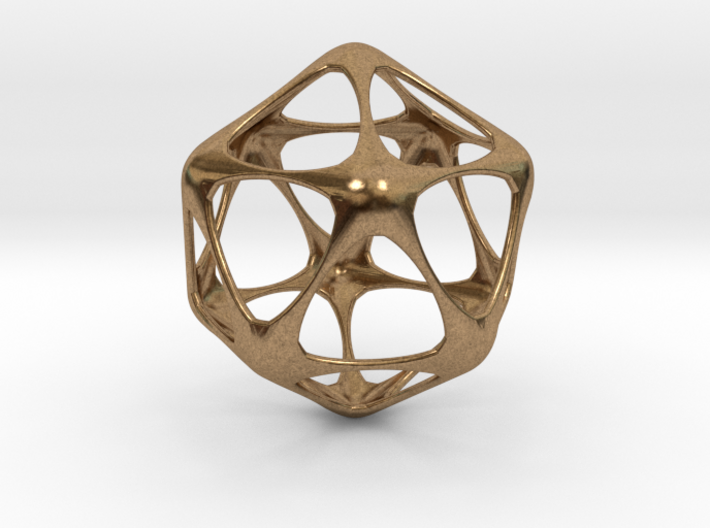 Sacred Creation
$44.39
3D printed in pure brass in its natural state with a slightly rough antique finish.
Want to complete your necklace? Add A Chain

The first secret, for example, is the Fruit of Life. From the Fruit of Life, Metatron Cube can be derived.
Through the complex lines of the 2D shape of Metatron Cube, other shapes can be formed. In total, five three-dimensional shapes can be formed. All of them have four very interesting characteristics in common.
To sum up:
The best-known platonic solid, is the cube. Firstly, all its faces are a square. Secondly, all of the edges have the same length and thirdly, all the angles between the faces are 90 degree. And last, all its point touch the surface of the sphere.
The other platonic solids are the Tetrahedron, the Octahedron, the Icosahedron and the Dodecahedron.
Unlike the cube, the other shapes are less commonly known.

Plato
So how did these shapes got their names? Well, these three-dimensional shapes were first described by the philosopher Plato (hence the name) around 400 BC.
Their names are based on their description in Ancient Greek. In case of the Icosahedron, εἴκοσι (eíkosi), meaning ‘twenty’, and ἕδρα (hédra), meaning ‘seat’.
But the strange thing is, these remarkable shapes are being dug up all over the world. What they’ve discovered is that they’re thousands of years older than Plato.

Their connection
But what makes them so special in the world of Sacred Geometry? Most importantly, all our matter is built upon these shapes. All molecules and atoms, follow a certain structure. Which makes matter as what it is. Sometimes these shapes are extremely complex, sometimes they’re very basic. And you might guess it already, the most primitive shapes possible, are the Platonic Solids. All other shapes can be derived from the Platonic Solids.

So what does this mean?
This means that the Platonic Solids are the blueprint of all matter. They contain every possible molecular connection and structure. Besides that, they also contain all possible geometric laws of this reality and universe we live in. It’s the secret key to Prima Materia; the primitive, shapeless base of all matter which got shaped and became the universe.

This solid represents the element water. Water is all about movement, change and go with the flow. Since it can easily change from gas to a liquid to a solid.
Besides water, it’s also connected to the Sacral Chakra (2nd). This Chakra resonates with emotions, creation and sexuality. Of course, just like the element water, the Sacral Chakra is also connected with all our fluids and liquids of our body.

So what can the icosahedron do for you?
It can assist you in many ways. For example, it enhances your creative thought process. Not only that, but also unblocking and removing emotional blockages that cut off the creative energies.

Besides, it will help you to understand the emotions that arise. It allows you to have a clear sight of why you experience certain emotions and helps you to react to it. It’s the perfect healing tool for finding balance and harmony, especially in the areas of fertility and sexuality.

What's in the box:
Icosahedron Pendant 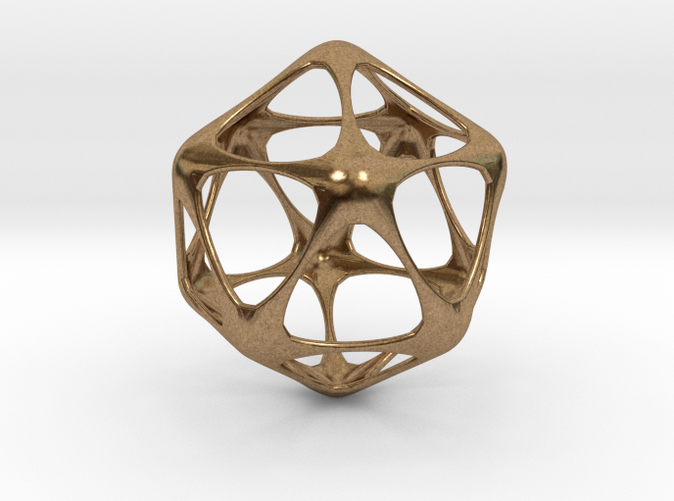 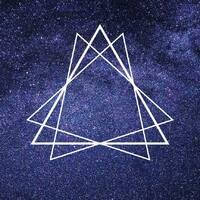 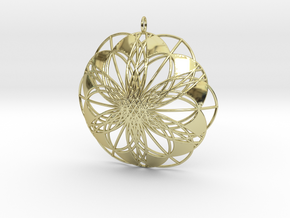