Ready to paint and fit 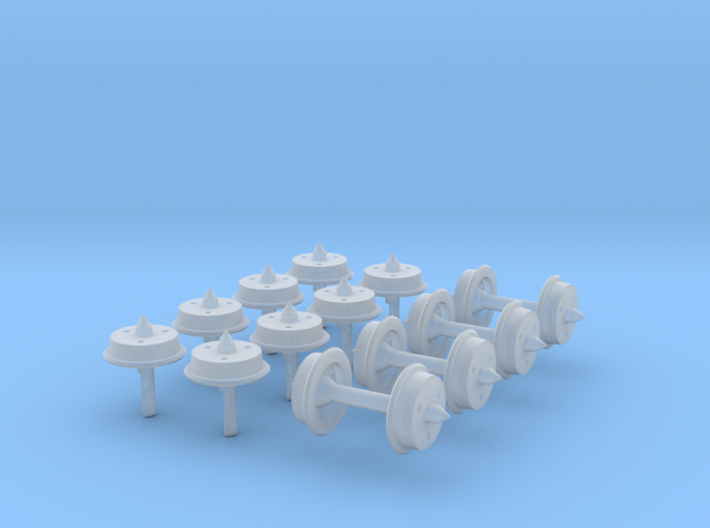 Experimental wheels for N-gauge model railway wagons. The purpose of the experiment is to see if the printing tolerances and material wear characteristics (pin point bearing contact and rail surface) are up to the job done by mass produced commercial equivalents. If the are, I may use them in model designs, printed in situ as working parts and ready to run! Two axles are fixed pairs for straight comparison with commercial equivalents. The other four wheels are separate and with half an axle - designed for a pair to be fitted together (with minimal glue) in the confined space of a model wagon chassis without having to distort the underframe as you would to fit a single-piece axle carrying two wheels. Models and kits in injection moulded plastics have the strength and flexibility to allow this, but I am not yet sure about a 3d printed chassis. If wheels can be fitted in place rather than printed in situ, it means they can potentially be replaced, and it allows for fitting a bronze or brass bearing cup at the pin point bearing surface, and this may reduce friction and wear and so improve running. If it works well I may increase the number of circumferential vertices from 32 to 64, offer different wheel diameters and profiles, and add detail such as 3 hole and various spoked designs. UPDATE: fine in Frosted ultra detail (see P22 hopper) though one wheel broke from an axle in transit. Painting the outer and inner surface of the wheel only, and the length of the axle between the wheels only, looks fine and leaves the rail and point bearing surfaces clean. I still have no idea about long term wear. No good in polished coloured plastic though - especially the two-part ones where the polishing process (which I now know involves beads) unsurprisingly distorts and erodes the thin half-axle stubs so they no longer fit together neatly. UPDATE: Now using 60 vertex circles to make placing 3-holes easier, 3 holes duly added and the wheel profile thinned from the back. The axle surface joint to the wheel has been made less acute to reduce the likelihood of breakage. I would suggest painting the outer surface of the wheels, and the axle only (not the backs, the tyre or the flange). I have retracted the half-axles' mating surfaces by a tiny amount to improve fit and leave a minute space for adhesive (otherwise the wheels end up non parallel and running with a slight wobble). I have also laid the axles horizontally, and all the half axles pointing upwards. Why not leave them vertical? Studying the previously delivered FUD axles I notice that one point is always fine and the other a bit blunt, and four out of eight half axles are good, the other four less so. My guess is the one at the top is printed last and the other spends more time in the matrix during printing and loses definition. Axles printed sideways in my P22 ballast hopper split chassis model (and suspiciously the broken one in my last set of axles) are recognisable from a visible stripe down the wheel surface, and their pinpoint quality is somewhere between the two. Worst pinpoints are the ones printed in situ in the "enclosed wheels" version of the P22 ballast hopper, probably also because they are printed early on in a long job, but I admit I am speculating and this is still an experimental project. 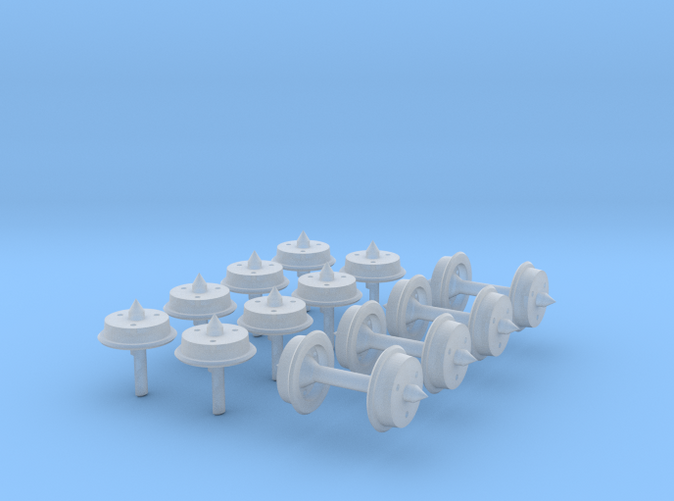 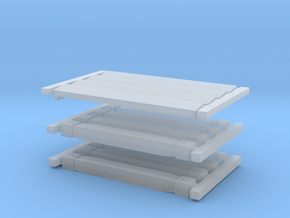 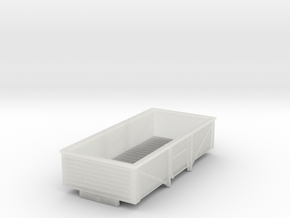 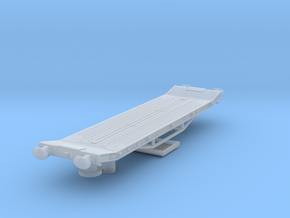 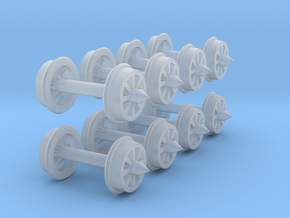