Decorative modern leaf pattern lamp cover . the leaf is a tobaco leaf , made in a torus type design so it covers the light, and also creates stunning leafy patterns on the surface its on . A lampshade is a fixture that covers the lightbulb on a lamp to diffuse the light it emits. Lampshades can be made out of a wide variety of materials like paper, glass, fabric or stone. ... A lamp shade also serves to "shade" human eyes from the direct glare of the light bulbs used to illuminate the lamp.
In the late 17th-century in Paris the first public lanterns made their appearance in the centre of the streets. They lit the road during the night. In 1763, the réverbères made their appearance. These were oil lamps with reflectors which were hung above the center of streets. The first public oil lamps in Milan, financed by revenues from a lottery, date from 1785. These were lanterns containing an oil lamp with a number of wicks. A semi-spherical reflector above the flame projected the light downwards, while another reflector, slightly concave and near the flame, served to direct the light laterally.
Friedrich Albert Winsor first had the idea of industrializing lighting by producing gas in a factory and distributing it through a pipeline. In the first decades of the 19th century, competing gas companies laid the first gas mains in major cities. But there were fears of explosion and toxicity.
The flame fed by the gas coming out of the nozzle was intense, uniform and adjustable, white and brilliant instead of the reddish or orange of oil lamps or candles.
The drawbacks of gas lighting were overheating of the air and extremely high oxygen consumption, making it necessary to ventilate the room or isolate the flame by separating the room where the combustion took place from the room being lit. Theatre audiences regularly suffered from headaches and the sulphur and ammonia formed during combustion of the gas ruined furniture.
Gas light had to be filtered by opal glass or light fabric shades. Lampshades were no longer used to direct the light but to attenuate it.
In 1879, Joseph Swan and Thomas Edison independently developed—combining and perfecting existing elements deriving from the research of Humphry Davy, De Moleyn and Göbel—the incandescent filament electric light bulb.
To disguise the intense electric light, lampshades were used. Some were made by Tiffany in colored glass. The great advantage of the electric light bulb was the absence of flame and traces of combustion, thus avoiding all risks of intoxication, explosion or fire. In the beginning, the filament was made of carbonised vegetable fibres, then bamboo fibres and finally metal alloys until, in the early 20th century, the tungsten filament invented in 1904 became established.
( Go to the below sketchfab link and go to details for more Links on this model  )
https://sketchfab.com/3d-models/leafy-torus-73a378a990024c7aa92f6443ea64c04b 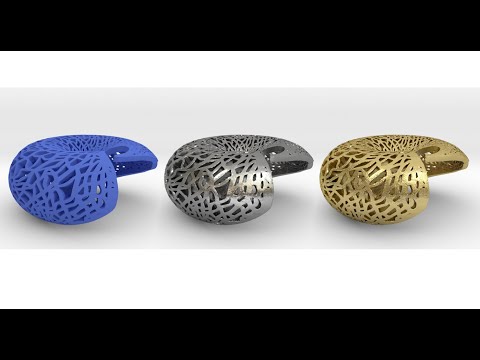