1/144 AMX aircraft model
Simple model of EMBRAER/Aermacchi AMX Aircraft with landing gears down.
Includes cockpit and canopy.
The canopy will be printed in the same material as the other parts. If you want it printed in different material, it is available as a separate part at www.shapeways.com/model/175906/amx_canopy.html

If you want a really transparent canopy, I recommend using this part as a master for push-forming a new one.

The AMX aircraft:
The AMX is a ground-attack aircraft for battlefield interdiction, close air support and reconnaissance missions. It is built by AMX International, an Italian-Brazilian joint venture, and is designated the A-1 by the Brazilian Air Force.

In 1977, the Italian Air Force issued a requirement for a strike fighter to replace its Aeritalia G.91 and some of its F-104 Starfighters. Rather than competing for the contract, Aeritalia (now Alenia Aeronautica) and Aermacchi agreed to make a joint proposal, as both firms had been considering the development of a similar class of aircraft for some years. Aermacchi, for example, had worked on a design study for a light ground attack aircraft, designated MB-340, in the early 1970s. Development work began in April 1978.

In July 1981, the Italian and Brazilian governments agreed on joint requirements for the aircraft, and Embraer was invited to join the partnership.

The first prototype flew on 15 May 1984. Although it was lost on its fifth flight (killing its pilot),[ the test programme progressed reasonably smoothly otherwise. Production started by mid-1986, with the first examples delivered to the Italian and Brazilian air forces in 1989. Since then, some 200 AMXs have been built. 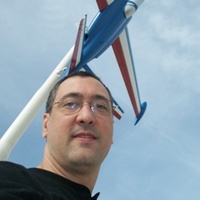