The Salsero, with 16 tubes tuned to C D E F# G# Bb starting from Bb1 (the middle line of the treble clef) to high E4, gives you the loudest part of the range to let you improvise with a Cuban rhythm section without a mike. Field tested in Havana Cuba. You can almost slip it in your pocket. Weighs in at 180 gr

Now retuned and with new embouchures. Some conicity has been introduced to tune harmonics, improve response, and facilitate playing high notes softly without warbling, You now have an instrument that is useful throughout its range for lyrical playing. It is a copy of the prototype I have been playing in my youtube videos (username = brilliantcorners).

This is a lightweight 16-tube whole tone panflute for improvising. The scale is Bb1-C2-D2-E2-Gb2-Ab2 through 2 and a half octaves to E4, straddling the range of a flute and a piccolo. The idea of wholetone tuning is to make it equally easy to play in all keys, and be able to switch scales at will. You can see my flash animation to illustrate the principle on http://improvise.free.fr/nai/nai.html.

Semitones are obtained in various ways - by tilting the instrument, by moving it down so that more of the hole is covered by your lip, and coolest (and fastest) of all, by holding it half tilted and thinking "blow up" or "blow down". With practice you can move each note down a halftone without anyone seeing how you do it. There are videos demonstrating this on youtube. I played diatonic panpipe daily for 13 years before I got this idea and changed the tuning to wholetone. It took me 3 weeks to get used to the new system and believe me I have never looked back.

I have made this model because of the difficulties I have had persuading panflute makers to make to my specifications, particularly regarding ideal diameters. I hope you can benefit from my experience, and save money and years of practice. Depending on the finish of this instrument I recommend sanding the surface that rubs against your chin, for extra comfort. Romanians also sand inside the tubes of their bamboo instruments just around the playing edge to create side flanges which act as resonating surfaces. I have take care of this in the design, so this is ready to play out of the box.

The 2 1/2 octave range chosen here is the easiest to play as well as being most suitable for high volume contexts. I have tried it out with groups playing Son Cubano in Havana, and it is perfect for descarga in all keys, playing the same lines as the flute, with up to four percussionists! 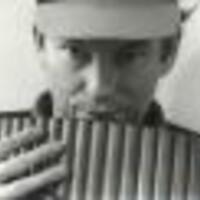