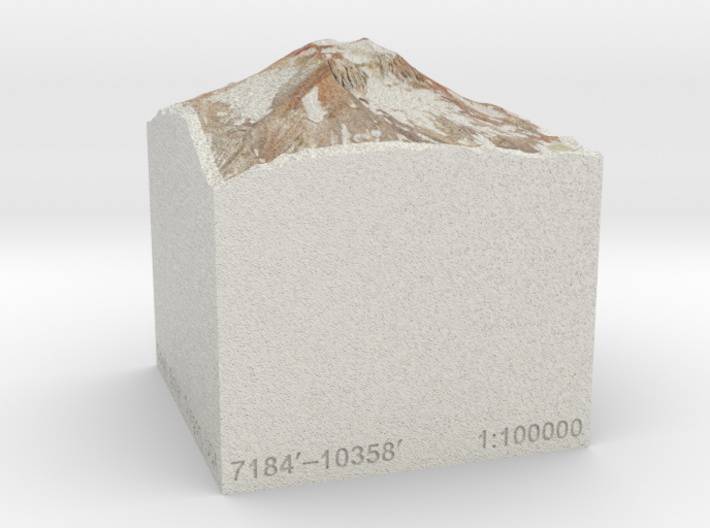 TinyMtn
$20.00
Ships as soon as 11 days
3D printed in fully colored material with a coarse finish and a delicate feel.

Rising to an elevation of 10,358 feet high in the Central Oregon Cascades, South Sister is the tallest and youngest of a trio of closely situated volcanoes known collectively as the Three Sisters. However, aside from its relative proximity to its other siblings, South Sister stands apart in at least two ways: it is the only one of the three which still has a perfectly preserved summit crater; and as North and Middle Sister are now extinct, South Sister has a relatively recent volcanic history, having last erupted no more than 2000 years ago, with even more recent smaller eruptions.

South Sister presides over a vast wilderness area in the outdoor recreational playground that is Central Oregon. Just half an hour's drive from the town of Bend, South Sister is scaled by ambitious hikers during the late summer months by way of a relatively nontechnical 6-mile trail that leads to its summit, the third-tallest peak in the state of Oregon. Winter conditions make an ascent of South Sister a more serious challenge after roads that access its trailheads are closed by snow, and only the most dedicated mountaineers attempt it during this time of year.

In 2001, advances in satellite radar technology revealed South Sister's ongoing activity and potential for future eruptions. A bulge of magma was discovered beneath the volcano, causing concern about whether South Sister would join Mount St. Helens in a modern-day fireworks show. While the magma distortion under South Sister has abated in recent years, scientists remain on alert as to whether this restless giant will one day reawaken.

I spent 15 years living in Central Oregon, and have made more than 25 successful climbs of South Sister. It is a beautiful and compelling mountain, and something of a personal icon in my life. I believe many outdoor enthusiasts in the Northwest have shared similar experiences on South Sister, and I am excited that it has been added to TinyMtn's collection of mountain models.

The Explorer series of TinyMtn models is designed to break our usual impression of mountains. We generally see mountains one at a time, from a distance, and from the ground. While all TinyMtn models give you a fresh perspective on any one peak, the Explorer series presents mountains in identical scale, and shifted up so that sea level is at the bottom of the base. Thus, when you set two Explorer models next to each other, you will immediately notice which is taller, which rises more from its base, which is more massive, and so on. Plus, all Explorer models come in full color, making them just that much more realistic.

These models have been optimized for the above materials, and are not offered in other materials for strength or cost reasons. If you need one in another material, please tinymtnbiz@gmail.com and we'll do our best to fulfill your request. 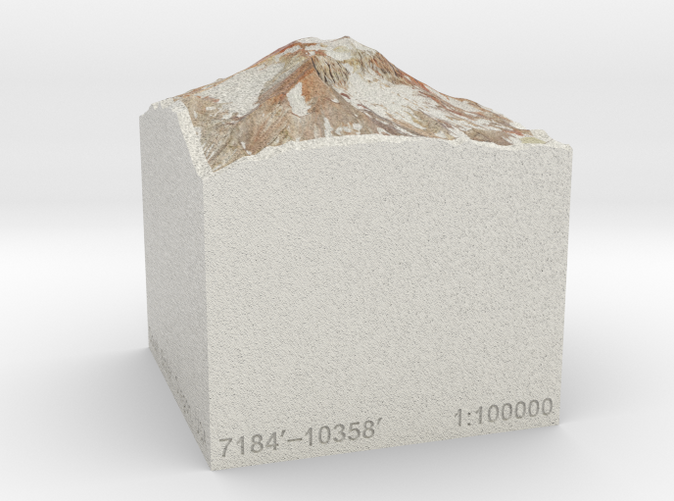