Truncated Sphere D33 - Kevin Cook Special Edition
This D33 is a special order by Kevin Cook for the 33,333rd  die of his collection (the largest in the world).
The number 33 reads 33333 to celebrate this event.
You can see all the dice owned by Kevin and made by Shapeways on his Shapeways page.

The numbering has been carefully studied.
All numbers are by groups of 3 that sum to 51:
- the 3 numbers at the North and South pole
- the 9 numbers at the equator and at the 2 tropic taken 3 by 3 (any 3 numbers at 120°)
All numbers sum to 34 by group of 2 (except obviously 17, since only 17 itself can sum to 17 to give 34):
- all the numbers of the poles and of the tropics with their symmetric number relatively to the equator
- all the numbers of the equator (except 17) with their symmetic number relatively at number 17

This one is not for sale, but you can have a look at the Regular Edition and the Frosted Edition. 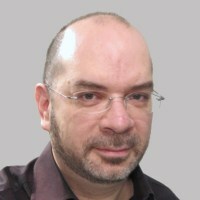