This star shaped object can be sun like a top or tossed like a die (since it is numbered the same on top and bottom it doesn't matter which way it lands) and thus be used to generate a number from one to six with equal frequency.

In short, it can be used as a d6 or a six-sided teetotum / spinner.

Its convex envelope is based on the isohedral shape: Hexagonal Dipyramid

I also offer a similar shaped die without the spinner handle on top. 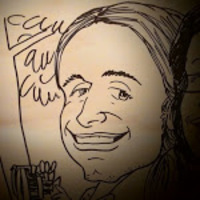