Products That Resist
$311.02
3D printed in fully colored material with a coarse finish and a delicate feel.

Aiming at discovering a different alphabet, the people and the language within the existing economical crisis, Jazmin Taco performs at the Athens School of Fine Arts by using the Greek flag and connecting powerful words onto her body, at her “Poetry in a time of Crisis” performance. Coming from Ecuador, a country that lost its national currency in 1999 because of an odious national debt and changed to the US Dollar, and from a family that still cannot recover from that crisis, Jazmin selects people from the audience to write directly onto her chest the Greek words “Ελευθερία ή Θάνατος” (Eleftheria i Thanatos - Liberty or Death). The two words are a war cry that arose by the Greeks when they were fighting against the Turkish occupation and is still a motto symbolizing the resolve of the Greeks against tyranny and oppression. As such, the nine syllables of the above words are represented in the number of stripes of the Greek flag. For Jazmin, these words sound like poetry.

The potential to transform and shape society by creating structures that include language, thought, action and object has been first introduced by Joseph Beuys in his Social Sculpture theory. Since the Industrial Revolution, manufacturing has been synonymous with factories, machine tools, production lines and economies of scale. On the current project, a 3D printed still of the performance operates as the manufacturing of a powerful message such as “Ελευθερία ή Θάνατος” (Liberty or Death) that can be distributed and delivered to the masses exactly like any other mass production product, manifesting every citizen’s duty of awareness. Industrializing of elements other than consumer goods, benefits from the currently available aspects of the democratization of the industrial production processes and therefore inadvertently contributes to the civilian’s perspective and the development of a conscious society.

This work was created in June 2015, about one month before the banks were used by foreign powers to take over the Greek government and bring down democracy. More information regarding the politics of the days can be found by using the #ThisIsACoup hashtag.

Jazmin Taco is a Performance artist from Ecuador based in Bern, Switzerland. Her work explores language(s) and associated, different, or even conflicting mentalities. For more information visit her website www.jazmintaco.ch
Dimitris Fotiou is a Sculptor & 3D artist based in Athens, Greece. His work explores concepts such as communication, information, and language. For more information visit his website www.fotiou.net

What's in the box:
Ελευθερία ή θάνατος (Liberty or D 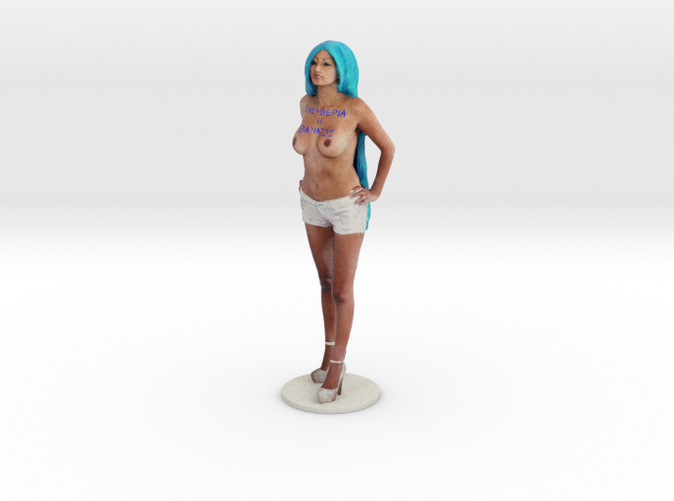