Mechaneu v1 is the first in a series of kinetic, 3D printed objects designed to explore the limits of 3D printing as an art form. Created in a one-shot fabrication process, Mechaneu v1 features an elaborate network of interlocking gears and support structures. Spin one gear and the entire sphere is catalyzed with rotation. The effect is mesmerizing, a visualization for the eye and a tactile experience for the hands.

The Mechaneu v1 was created with sophisticated 3D modeling tools and custom algorithms. The texture and tactility of Mechaneu v1 are a result of an algorithm that models cellular growth patterns, giving the object its porosity and pattern.

The structural thicknesses, extrusions, gear ratios and other elements of the Mechaneu were calibrated for both strength and quality of interaction through a process of physical and digital prototyping. Though each gear is extremely thin and porous, they feel solid to the touch and invite interaction.

The structure pushes the limits of most commercial print services. Mechaneu v1 is a limited production art object that will simultaneously push forward and exemplify the current epoch of 3D printing.

Spherical gears have long been a topic of mathematical and practical discovery and insight. Kenneth Snelson proposed a spherical set of gears as an intuitive model for learning about atoms and the configuration of electron orbits. His "atom" project resulted in this patent from 1966 (now expired). His wonderful animations show different gear configurations in action. In 2011, mathematician Paul Nylander created a software to find all potential configurations of spherical gear assemblies. The Mechaneu’s configuration of gears is a truncated icosahedron, which was included in this exhaustive set. The truncated icosahedron, sometimes referred to as Fullerene, was also explored by Eric Cox in his 2012 blog post on spherical gear configurations. 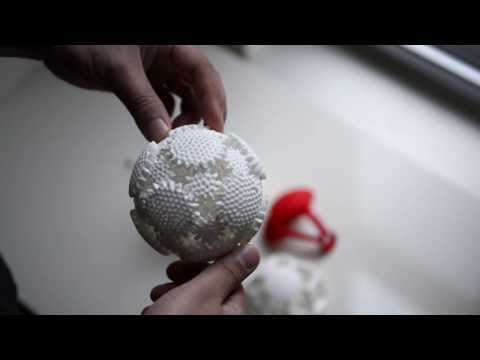