Shapeways responds to COVID-19 How can we help?
Marketplace Miniatures Ships 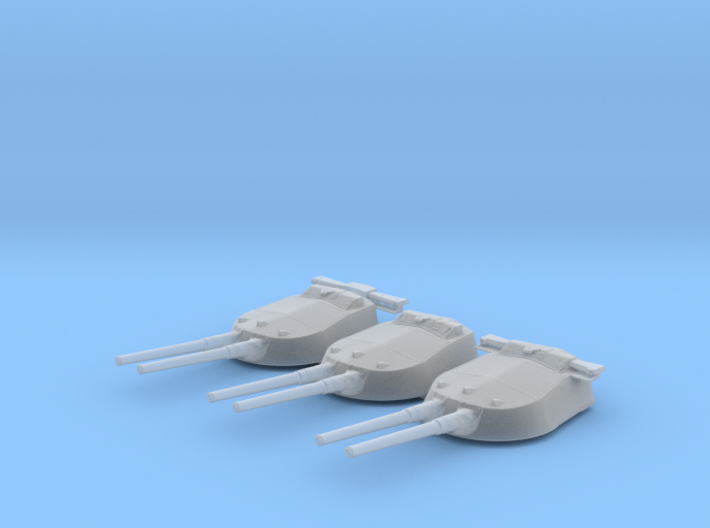 1/350 Scale 15 Inch MKI* HMS Repulse 1920 Guns with Blast Bags x3. These Turrets depict the Repulse as she appeared in 1920 with the addition of 2x 30ft Rangefinders on A and Y Turrets. These are incredibly highly detailed parts modelled from the plans in the Norman Ough book as well as many photographs to make these the most accurate and detailed Renown MKI* turrets available. These parts are NOT lifted from computer game models like some other Shop Owners parts. Check to see which sellers show separate renders of their items not just the Shapeways default render. Available in most other common scales and for specific ships and time periods.

Details include:
This was quite possibly the best large-caliber naval gun ever developed by Britain and it was certainly one of the longest-lived of any nation, with the first ship-board firing taking place in 1915 and the last in 1954. The design of this weapon was largely based upon the 13.5"/45 (34.3 cm) Mark V and it was rushed into production, bypassing the normal - and lengthy - prototype stage. This shortened design cycle was approved by the Director of Naval Ordnance, Rear Admiral Archibald Moore, who staked his "professional existence" on its success. The reason for this rushed procedure was to allow what became the Queen Elizabeth class battleships to be armed with larger guns than would have otherwise been possible. Although their first warshots were for bombarding shore positions at Gallipoli in 1915, the value of these weapons was not truly shown until the Battle of Jutland (Skagerrak). In that battle, the British battleships with these guns were able to engage German battlecruisers at a range of 19,000 yards (17,400 m), which was beyond the maximum range of the guns on the German ships.

By the mid-1930s the Admiralty saw these guns as growing obsolete, as other nations had developed more powerful weapons, capable of longer ranges and firing heavier projectiles. Along with this, the ships carrying these guns were approaching twenty years of service and starting to show signs of wearing out. Inhibited by treaty restrictions from replacing the battleships, the British instead sought to rectify the situation by initiating a "modernization" program whereby the ships had major overhauls performed and had their weapons upgraded. There were two significant improvements made to these guns during the modernizations: 1) The upper elevation limit of the mountings was increased from 20 degrees up to 30 degrees, which raised their maximum range with 4crh projectiles from 23,700 yards up to 29,000 yards (21,670 m to 26,520 m), and 2) The projectiles were redesigned to add a more streamlined ballistic cap (6crh), which increased the range still further to about 32,000 yards (29,260 m) at 30 degrees elevation. Thanks to these modifications, in July 1940 HMS Warspite made one of the longest hits ever scored by a naval gun on an enemy ship when she struck the Italian battleship Guilio Cesare at approximately 26,000 yards (23,770 m).

The rate at which these ships could be modernized was limited and by the start of World War II Malaya, Barham, Repulse and the five Royal Sovereign class battleships had not yet been upgraded. Royal Oak, Barham and Repulse were sunk early in the war, but the remaining unmodernized ships were given a "Super Charge" which consisted of the largest possible propellant charge that the guns and mountings could safely handle. These were issued starting in late 1941 and at the maximum elevation of 20 degrees allowed a range of 28,700 yards (26,240 m). However, from a study of the records, it would appear that no ship ever fired a shot using Super Charges, although they were used by the coastal artillery at Dover. Super Charges were not issued to ships with 30 degree mountings as the increased barrel wear and mounting stress was not considered to be acceptable. For this reason, sources which quote HMS Vanguard as having gun ranges in excess of 32,000 yards (29,260 m) are somewhat misleading, as such a range would have required the use of super charges, which she never carried.

In addition to the ship-board guns, there were also four guns (one source says five) used as coastal artillery at Singapore and a further two mounted at Wanstone near Dover.

Constructed of tapered inner A tube, A tube, full-length multi-start wire, B tube, overlapping jacket and breech ring. Used a Welin breech operated by hydraulic Vickers "pure-coupled" mechanism. A total of 186 guns, including two prototypes, and 58 turrets were manufactured between 1912 and 1918.

The second prototype gun, E597, was to a considerably different construction, having a full-length jacket, no B tube and an Elswick three-motion short arm breech mechanism which considerably reduced "slam." This gun suffered a failed A tube during proof testing. Had this gun not failed, the Elswick breech mechanism probably would have been used on all production guns.

Note: It is often asked if the British ever planned to use these guns for the King George V battleships of World War II. The answer is that they did not, but there was some investigation into using a new design, the "all steel" 15"/45 (38.1 cm) Mark II gun. 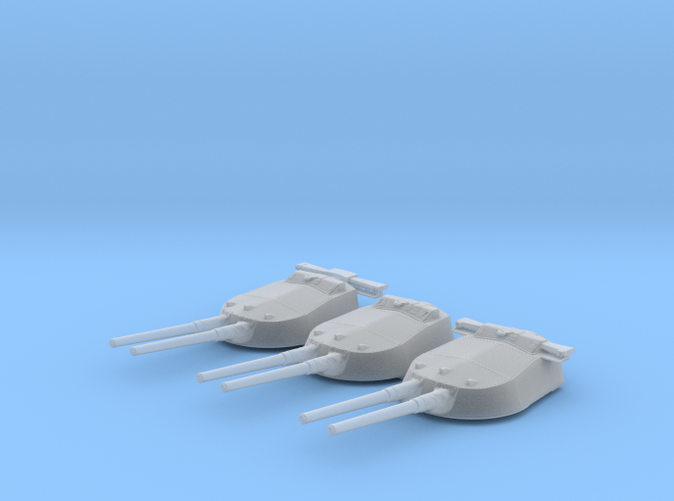 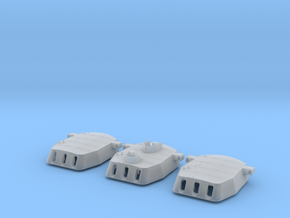