The harbor (or harbour) seal (Phoca vitulina), also known as the common seal, is a true sealfound along temperate and Arctic marine coastlines of the Northern Hemisphere. The most widely distributed species of pinniped (walruses, eared seals, and true seals), they are found in coastal waters of the northern Atlantic and Pacific Oceans and the Baltic and North Seas.

Harbor seals are brown, silvery white, tan, or gray, with distinctive V-shaped nostrils. An adult can attain a length of 1.85 m (6.1 ft) and a mass of 132 kg (290 lb). Blubber under the seal's skin helps to maintain body temperature. Females outlive males (30–35 years versus 20–25 years). Harbor seals stick to familiar resting spots or haulout sites, generally rocky areas (although ice, sand, and mud may also be used) where they are protected from adverse weather conditions and predation, near a foraging area. Males may fight over mates under water and on land. Females bear a single pup after a nine-month gestation, which they care for alone. Pups can weigh up to 16 kg (35 lb) and are able to swim and dive within hours of birth. They develop quickly on their mothers' fat-rich milk, and are weaned after four to six weeks.
( Go to the below sketchfab link and go to details for more Links on this model  )
https://sketchfab.com/3d-models/baby-seal-27f8bc5de0664eac8665c313b77e8e68 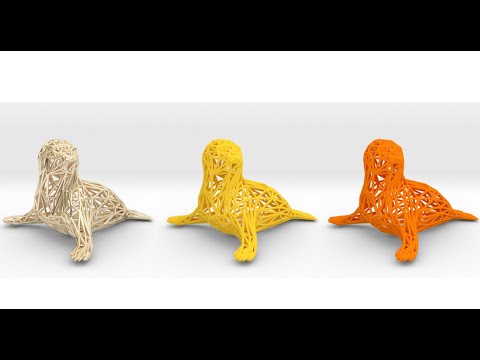