NO Markup on this Item!

This adaptor is used in conjunction with the well proven Zoom H2n Microphone, the Samsung Gear Value Accessory Pack and the H2n Microphone Mount.

It can also be used alone (with the additional 1/4" UNC  nut or bolt) to fix other accessories above the camera, such as LED lighting.


In Virtual Reality the audio is often overlooked, however spatial audio can be transformative to VR 360 viewing. It is the medium that gives the experience that convincing sense of realism. When the Virtual Reality viewer moves their head, the sound stays "fixed in space" giving it a location in the listeners perception. Unfortunately, when it comes to 360 Video cameras, Spatial Audio recording is not a function of most consumer level cameras . For some reason manufactures of 360 Video cameras are not focusing their products on the audio. The Zoom H2n stand-alone microphone now has the capability to record Spatial Audio. It is the microphone Google uses on their professional $30,000 Jump 360 camera setup.

With the following components it is possible to mount the Zoom H2n on top of the Gear 360 in such a way that it is not visible in the camera frame. Because of its central and close proximity to the camera it is hidden within the camera’s parallax. Thus it is not necessary to remove it in video post production. This adaptor arangement allows both the audio and video to have an unobstructed, full 360 degree, "Field of View".

Here is an overview of the setup.

The Gear 360 camera adapter is attached to a mono-pod by screwing the mono-pod through the adaptor into the camera. This is then aligned and tightened. With an easily obtainable 1/4" UNC nut, the mount now exposes a 1/4" thread on top of the camera ready to mount the mic. This, of course, could be also used for other purposes such as lighting.

N.B. The mount has now covered the shutter button so a Remote Control will need to be used. If you are using the Samsung Gear 360 Camera Value Kit then the Remote Control from this can be used. Otherwise a compatible phone with the Samsung Gear 360 app will be required. The adapter was designed this way to keep the H2n within the camera's parallax.


To counter the offset thread on the base of the Zoom H2n, the H2n Mic Mount is used. This is simply screwed on to the H2n with an easily obtainable 1/2" x 1/4" countersunk screw. Once attached, the mic can now be clipped on and off to the top of the camera via the Quick Release Buckle. The H2n mount has been specifically designed to attach to the Samsung Quick release buckle. I have had little luck connecting other GoPro products to this buckle.

Parts List. To make this mount you will need:
Why have I chosen 3D printing with Shapeways?

The products here are very specialised and are tailored to a very specialist market. As such, the economics of mass production cannot be applied.
I have done a lot of research into different printing services. Services such as Shapeways gives access to the latest, most expensive, industrial quality 3D printing machines. Shapeways in my view offers the best quality/price/production-time balance. 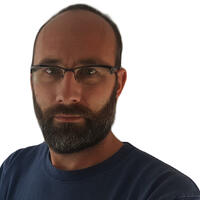