This is an experiment to create a 3D model using 123D Catch by Autodesk. The input to the process was this video. The output of the process was among others this 3D animation.

The Shapeways 3D model was made by perfomring the following steps.
1) Shoot a video by circling the photo model several times and making sure that all relevant parts are capture. The first shoot went wrong, as 123D Catch could not stitch the hair at the back of the head. This problem was solved by sprinkling confetti on the hair.
2) Use the Free Video to JPG Converter by DVDVideoSoft to extract 50 .jpg pictures from the video.
3) Use the 123D Catch software from Autodesk to create a photo scene.
4) Export the photo scene to an .obj file.
5) Do some cleanup on that mesh (filling up the bottom), using e.g. Rhino and MeshLab.
6) Upload the 3D model to Shapeways.
7) (And then buy and/or sell the model as 3D print). 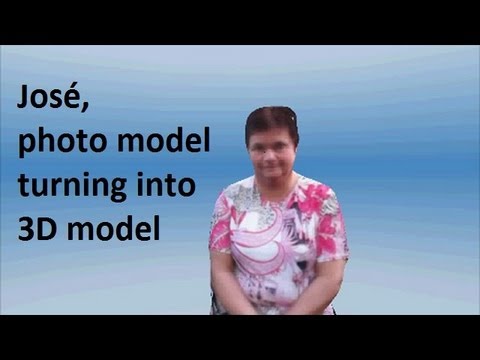 What's in the box:
José as 3D model