---
The John Hancock Center is a 100-story, 1,128-foot supertall skyscraper at 875 North Michigan Avenue, 175 E. Delaware Pl., 170 E. Chestnut St. Chicago, Illinois, United States. It was constructed under the supervision of Skidmore, Owings and Merrill, with chief designer Bruce Graham and structural engineer Fazlur Khan. When the building topped out on May 6, 1968, it was the second tallest building in the world and the tallest outside New York City. It is currently the fourth-tallest building in Chicago and the eighth-tallest in the United States, after One World Trade Center, the Willis Tower, 432 Park Avenue, the Trump Tower Chicago, the Empire State Building, the Bank of America Tower, and the Aon Center. When measured to the top of its antenna masts, it stands at 1,500 feet (457 m). The building is home to offices and restaurants, as well as about 700 condominiums, and contains the third highest residence in the world, after the Burj Khalifa in Dubai and the Trump Tower in Chicago. The building was named for John Hancock Mutual Life Insurance Company, a developer and original tenant of the building. 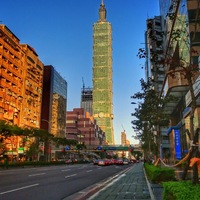