The Klein bottle.
A mathematical classic, it was first described by the German mathematician Felix Klein in 1882 and is a great example of a non-orientable surface. It has no defined inside or outside, as the surface loops back on it self.

This is my take on one of the more popular exercises in 3d printing, hoping to complement the idea and perfection of the original surface and previous attempts before me.
Smaller version here.

Crossing borders
Because there is one thing with the physical versions I have seen so far. They lack the spirit and esthetics of the original concept and have an issue at the junction.
Whenever the bottle loops back in on itself, at the crossing, one usually sees a crude fuse/weld, or simply a blunt hole in the surface through which it passes itself.
Now for the transparent glass-blown versions that can actually function as a bottle, I think this is an acceptable compromise and I applaud the skills of the craftsmen.
But with 3d printing I felt we could do better.

Weave!
So to get around this issue, one can apply a pattern that allows for the surface to go through itself without touching or visually disturbing the flow of the surface itself.
I chose a cellular Voronoi pattern that is "self-aware":
It does not touch the passing surface, but weaves perfectly in between itself.

How was it made
This model was created using a custom build tool set which utilizes Voxels.
First, I ran a charged particle simulation, which distributes the particles evenly across the endless surface of the Klein bottle, while taking into account the different "planes" of existence. Then in a voxel-space the cellular pattern is created using those particles as voronoi cell centers, but again taking into account the different planes.
And finally the model was converted to polygon format for uploading and 3dprinting. 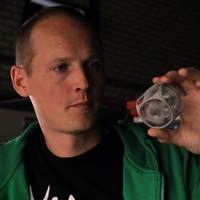