M1928A1 Thompson Submaching Gun ("Tommy gun").
The M1928A1 Thompson submachine gun was popular during WWII by soldiers as well as navy personnel. It was also used by PT boat crews for boarding enemy craft or landing parties.  The gun fired the standard .45 caliber ACP round.

This 3D model was generated by using original drawings.  Some features had to be beefed up so the features would make it through the printing process.  The pieces (below) are all joined on a sprue to keep the price down.  Parts are easily removed.  You can choose which magazine to cement to the gun.

​My parts (1/20 scale) arrived June 26, 2017.  They look pretty good and am anxious to get them painted and on my PT-61's raiding/boarding crew figures.  When I get that done I will be posting photos.  1/16 scale parts will be enen better as they do not force the limits of Shapeways' dimensional requirements for this material. 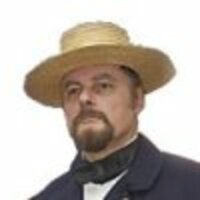