NiTrideDesign
$35.91
3D printed in treated and polished for a dark grey sheen, with visible print lines. 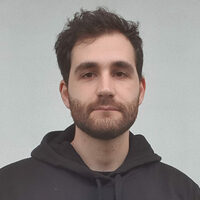