A five piece kit to assemble a 1:2000 scale model of a Python Class Cruiser from the computer game Oolite.

This version of the Python first featured in the Space Traders'  Handbook, accompanying the game 'Elite', but wasn't actually included in the game. I initially modelled it for Oolite, then decided it would be fun to have one I could actually paint with the shark-face design.

The model's been through a few iterations since I originally made the model walls too thin. Thickening them has increased the price somewhat, but it's still good value for the level of detail achieved. 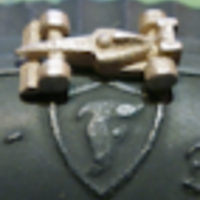