darnellvfx
$59.20
Ships as soon as 23 days
3D printed in polished brass plated with 14k gold
Want to complete your necklace? Add A Chain

The Triple Goddess has been adopted by many neopagans as one of their primary deities. In common Neopagan usage the three female figures are frequently described as the Maiden, the Mother, and the Crone, each of which symbolizes both a separate stage in the female life cycle and a phase of the Moon, and often rules one of the realms of earth, underworld, and the heavens. These may or may not be perceived as aspects of a greater single divinity. The Goddess of Wicca's duotheistic theology is generally portrayed as the Triple Goddess of the Moon, her masculine consort being the Horned God. 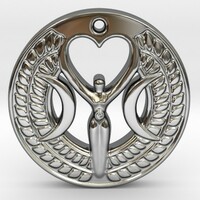