The Vega was the first Lockheed aircraft design, after being founded in 1927. Over 130 were built, most as six-passenger transports. Several were used in record-breaking flights including Wally Post's flight around the world and Amelia Earhart's solo flight across the Atlantic. Several served with the U.S. Army Air Corps as the Y1C-12, Y1C-17, and UC-101.

This model is a re-scale of our Lockheed Vega 1/285, some parts have been altered to better fit the new size. 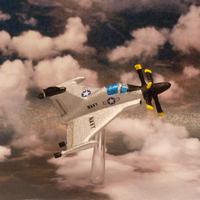