3D Print Your Next Robot

3D printed robots are fast becoming the standard in robotic technology, and these exciting and adaptable new robots are lighting the way to the future of robotics. Depending on how the robot is programmed, here are some of the functions these robots are capable of:

If you’re looking to develop a greater understanding of how 3D printing is being applied to building robots, there are some great educational and fun DIY bots you can build now. Most builds are easy enough and can be completed within one weekend. The PLEN Project was created by Natsuo Akazawa in Japan, originally as a Kickstarter campaign. Akazawa’s robot design quickly took off, and today there are multiple iterations of this fun humanoid robot.

The PLEN2 robot stands about 8” tall and has 18 different joints, allowing it to move and articulate fluidly. Customers can purchase DIY kits that include everything needed except the 3d printed body, or complete kits that include the body parts for people who don’t have access to a 3D printer.

Once your robot is ready for action, it can walk, dance, and interact with you. It’s a great starting point for those looking to learn more about robotics and 3D printing.

Taking inspiration from everyone’s favorite robot pal, Bob the Biped, Otto is a fun and easy-to-make 3D printed robot that anyone can make.

Otto is an open source robot, so you’ll be able to find all the plans you need for printing and building your own robot with ease. The body and limbs of Otto are entirely 3D printed, and Arduino controllers and mini servos are used to control the robot’s movements.

Once the parts are printed, Otto can be assembled in as little as one hour with just a screwdriver, making it one of the easiest robots to build and learn about. Like most small DIY robots, Otto is primarily designed to help children reinforce STEM skills, but that doesn’t mean adults can’t get in on the fun, either.

For those looking for a robot build that they can customize to tackle different tasks, the EEZYbotARM from Italian designer Carlo Franciscone may be perfect for you. This easy to build robotic arm is easy to print and assemble, and it’s capable of tackling a myriad of different tasks you can program yourself.

This robot requires 17 different 3D printed parts along with a controller, servos, and a few nuts and bolts. Once the printing is complete, this robot can be built in just a few hours. Once the basic robot is complete, you can experiment with different grippers to better equip the robot to handle different tasks. This robot is designed to be fully hacked for whatever purposes you can dream up, so it’s one of the easiest robots available to program and customize. All of the body parts are 3D printable, and it’s fully open source so anyone can create and customize their own Poppy Humanoid.

If you’re looking to tackle a more advanced robot that you’ll be able to program in tons of useful ways, the Poppy Humanoid may be your best bet.

Each piece of the robot’s body is entirely 3D printed, and it can be controlled with a NodeMCU or an Arduino controller. High-speed servos allow Kame to master any movements you program. He can hop, run, jump, or walk with different gaits.

Kame is a great project for more advanced builders as well as anyone looking for a challenge.

DIY robots are a great way to get acquainted with the application of 3D printing in the robotics industry. For more sophisticated builds, leading corporations across a variety of industries are beginning to harness the power of 3D printed robots. Let’s take a closer look at how advanced robots are using 3D printing. 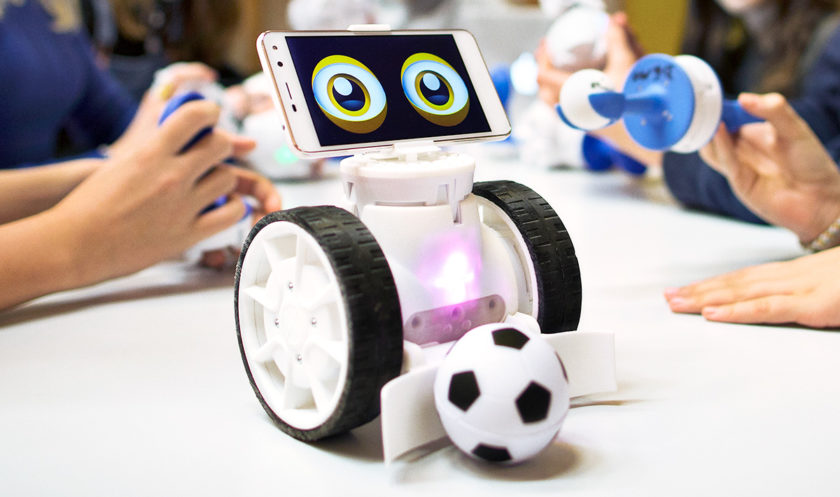 The Fable robot by Shape Robotics

Fable is a modular construction system that students can use to create their own robots. Shape Robotics utilizes 3D printing parts manufactured by Shapeways to expand the usability of their robotic products. Among other things, it gives the students a greater opportunity to use their own imagination to build robots by using the 3D printed parts in their design. Students can assemble modules together in many different configurations to build custom robot bodies, use inbuilt sensors and program the robot’s movements.

As one of the leading automation specialists in the world, KUKA Robotics manufactures robotics for the automotive, aerospace, and general manufacturing industries. Considering that each industry has unique demands, it’s rare that KUKA can employ the same style of robot across multiple industries.

But 3D printing is making it easier for them to adapt to changes, and they presently use 3D printing to produce the end effectors (the component which grips, grabs, or wields) for their robots to enable them to complete their highly specialized task.

Siemen’s Spiders (SiSpis) may look like cute quadruped robots at first glance, but these cartoonish robots mean big things for the growing 3D printing industry. One of the largest concerns of 3D printing has been its ability to scale in size. But these little spiders are up to the challenge, and they’re leading the way for large scale additive manufacturing.

These robots can work collaboratively to create structures and surfaces on a scale that was previously unattainable with traditional 3D printing. For larger jobs, hundreds of robots will be able to work collaboratively, using their onboard cameras and lasers to interpret their environment, determine their working area, and begin working on their assigned tasks.

The aptly named BionicANT takes its cues from the humble insect it shares a name with. These robots work together collaboratively to tackle tasks that would be either too large or too complex for a single BionicANT to handle.

This robot looks exactly like an ant, just several times larger. Each component is 3D printed, and MIDs are used to connect individual components. This also adds a very cool visual appeal to these robots beyond its functional purpose. Each robot is equipped with cameras, sensors, and a radio module, which allows it to communicate with other robots.

Working together, these robots can conquer complex tasks with ease, and it’s easy to see how they could play a major role in virtually every industry moving forward.

In the world of consumer robots, InMoov is one of the most impressive 3D printed robots there are. Each component of the robot’s body is entirely 3D printed, and those components are controlled with Arduino microcontrollers. Amazingly, anyone can download the files needed to print their own InMoov robot.

The robot works on the open source MyRobotLab framework, which allows tech-savvy users to customize the robots’ function. InMoov robots can see, hear, speak, and make independent movements. Considering the robot was developed by Gael Langevin, a French sculptor with no prior robotics experience, it’s easy to see the potential for open source robots like this in the future.

The ASPIR robot was developed by John Choi of Choitech, a new robotics startup. This humanoid robot stands just over four feet tall, and every piece of its body is 3D printed. This open-source robot is designed to bridge the gap between prohibitively expensive research-grade robots, and more affordable humanoid robots that anyone can afford.

The robot’s primary purpose is as a positive reinforcement tool and study buddy, and Choi hopes that it will inspire more girls to enter the field of research in robotics, which is currently a primary focus for his team.

3D Print Your Next Robot

3D printing has had a significant impact on the robotics industry. Perhaps best of all, these new technologies are available to everyone, and anyone with a bright idea and some basic robotics knowledge can create their own amazing 3D printed robot.

Ready to get started with your own robot? Find out how Shapeways can help make that happen.