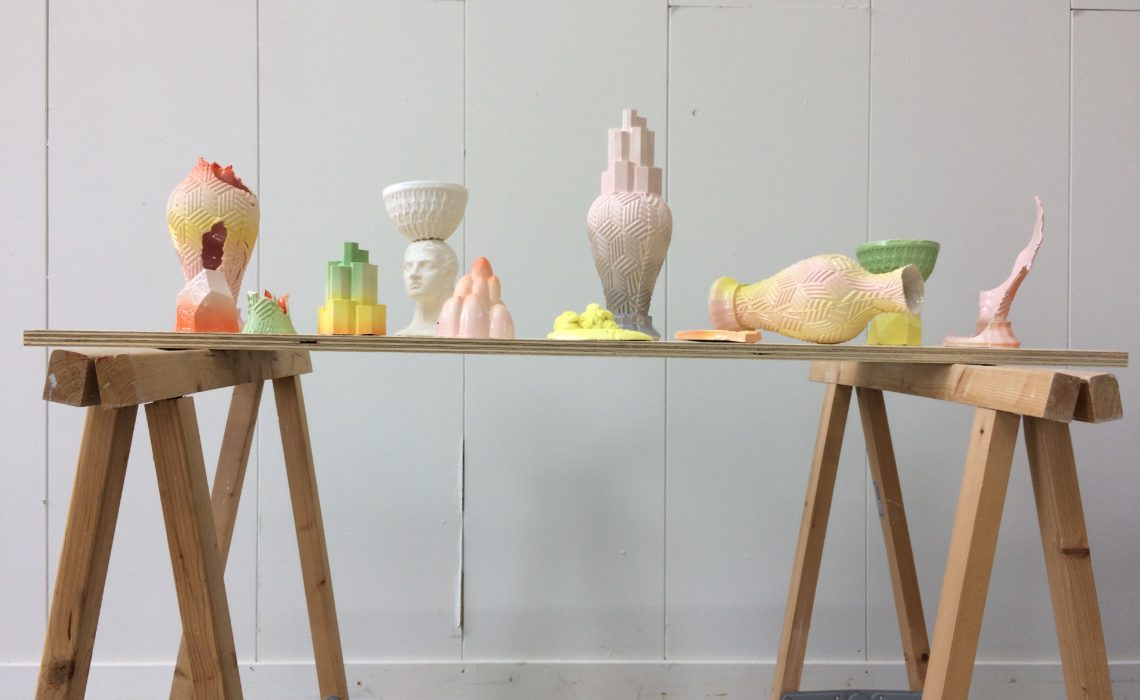 Glassblowing is an exercise in precision. To make an object, blowers manipulate glass that’s been heated to more than 2,000 degrees fahrenheit, carefully sculpting and shaping it with a blowpipe and torch. For many artists, working with glass is almost like a form of engineering. “We judge our success on how much control we have over the material,” says Tim Belliveau, an artist who has been blowing glass for more than a decade.

Belliveau’s work is precise, albeit in an entirely different way. For years, he and his fellow artists at the studio Bee Kingdom blew glass traditionally, creating amorphous shapes that subtly subverted the idea of conventional glassblowing. Then, a few years ago, Belliveau began noticing 3D printers popping up in studios and schools where he was working. “I thought that it was really interesting to have both a handcrafted tradition and automated technologies,” he says.”It was a really strange combination.” Belliveau started to rethink his own process, which had become costly and time-consuming. He wondered: What might happen if he merged an ancient hand craft with advanced manufacturing? Would it be cheaper and faster? Would the pieces themselves be compelling? “It was a curiosity,” he recalls. “I felt like, if I can’t make any headway in what I’ve been doing, can 3D software help me see it in a new light? I hoped it would challenge me in ways I hadn’t see the material before.”

Belliveau’s first 3D printing project was an exploration in materiality and efficiency. He wanted to create a single mold into which he could blow molten glass. “I was trying to figure out how to get from a 3D model to a glass piece as directly as possible,” he says. The mold needed to be thin, to save on cost, yet heat resistant enough that the hot glass wouldn’t warp and melt the mold upon contact. Plastic was out of the question; so was metal like aluminum. After months of research, Belliveau realized he could print Shapeways’ raw bronze at 2 millimeters thick and it would hold up to the high heat. He made 20 glass vases in a single day using the mold — far more than he could’ve done by hand. “The results looked like gift shop glass,” he says.

A view of the 3D printed mold for glassblowing in action His new process was indeed faster, but printing in bronze was still just as pricey. So Belliveau began studying a new way of molding glass that harkened back to ancient Rome, where glassblowers would sculpt a positive mold out of wax and then cast the wax figure in bronze or clay. They would then melt the wax to create a negative mold out of the material and blow molten glass into it create an impression.

For Belliveau, this age-old process was a fascinating experiment in efficiency, and it led him to adapt the ancient tradition using modern technology. For many of his new pieces, Belliveau now designs positive molds in software, 3D prints them in plastic, and then casts them in a clay that’s able to withstand the heat of molten glass.

It’s a blend of modern and traditional that ultimately democratizes the art of glassblowing. “When I teach students now, I tell them this is a thing you can do from your home,” he says. “You don’t need a special school or special foundry.” Just some imagination and a 3D printer.